Have you Seen the Bread? 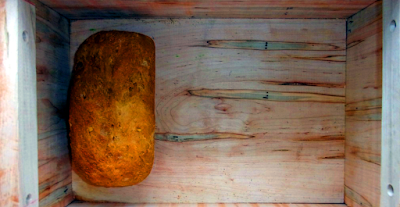 After my husband’s car accident, concussion-related challenges seemed to pop up daily. Dizziness and balance issues, constant ringing in his ears and word-finding problems started immediately. His PTSD kept us awake at night with terrifying dreams and his days were spent trying to figure out how return to work in his newly disabled body. The bills piled up and everyday life items seemed like great obstacles on our road to recovery.

As we both adjusted to our “new” life, we were also faced with the funny quirks that came along.

Sometimes, he would say things that made absolutely no sense and we’d collapse into giggles – we still do this today. Sometimes, he would say things that made me blush and if we were in public, some of those things could be inappropriate. Usually, he didn’t realize that what he’d said could be hurtful or embarrassing. He was crushed if I mentioned that something may not have been the right thing to say. It was a fine line for me to walk – ignore bad behavior and lose our friends and family or speak up and hurt his feelings. I still struggle with this one today.

During those first couple of years, we had a lot of mysteries in our house. Things would go missing – lots of things. Like forks. Spoons. So many utensils went missing that we emptied the silverware drawer during one meal. We bought new forks and spoons several times during the first five years after the accident. Since we still had children in the house, they were usually blamed for the missing utensils, missing drinking glasses, and last-roll-of-toilet-paper using. When the kids grew up and moved away and we were still scratching our heads, I realized the problem was bigger than I thought.
Through it all, we have been able to laugh and find humor in the day-to-day hurdles.

Now and then we treat ourselves to coffee “out.” This isn’t the kind of coffee we brew in our pot, but instead is made by someone else, exactly how we want it. My husband calls it, “Fancy coffee.” During one of these coffee outings, we splurged for frozen coffees. Here in New England, there is a Dunkin’ Donuts on every couple of blocks and my husband loves their Mocha Coolatta’s. (He also struggled with consuming mass quantities of sugary treats soon after his accident, but that’s another story.) If you’re not familiar with the drink, it’s made of frozen coffee, lots of cream, chocolate syrup, and then it’s all blended to a slush. His always came Large and covered in whipped cream. To be clear, this isn’t a diet beverage.

After buying our drinks that day, we took a drive out to the beach. We talked about life, our kids, the news, chores around the house, and sang along to the songs on the radio. Eventually, he reached for his Coolatta and it was empty. Still driving, he stared at me for a long time. (My drink was still mostly full.) I figured what the outcome would be, so I wasn’t surprised when he finally said, “Did you drink my drink?!” This same scenario has played out over the years, with candy, French fries, and even soda’s and coffee. He didn’t believe my answer and we still laugh about it.

With all of the changes his brain was going through and the noise of a freight train in his ears, he was easily distracted all the time. Random things showed up where they shouldn’t have. There was cheese in the cabinet. The pepper-shaker appeared in the fridge. Tennis shoes made their way to the garage as if by magic.

While making his peanut butter sandwich one day for lunch, he called me at work to say he couldn’t find the bread. I’m not normally a sandwich-eater, but I was certain that we had new loaf, purchased just a couple of days prior. He was disappointed for lunch that day and it was a priority when I got home from work. Sometimes, finding things that are put away in the wrong places can be difficult. My first clue was that the toaster was on the counter. We always cleaned it after using it and tucked it into a cabinet. When I looked into the cabinet, there was the loaf of bread, ready to be eaten. Apparently, after breakfast, he put the bread away where the toaster belonged. At lunchtime, he didn’t connect the relationship between the toaster being on the counter and the bread missing. He is able to realize that this happens now and will usually re-trace his steps to figure out what happened.

A couple of years ago, during a time that nothing went as planned and he was repeatedly frustrated, I started a game. An ordinary can of turkey gravy turned up in the living room, next to the television remote. It took him a couple of days to realize that it was there, but he surprised me by asking, “Did I leave this here?” I felt terrible that he thought he actually left it there, but he played the game. The next day, I found it in the bathroom. The day after that, he found it in his office, next to his phone. We didn’t put it in obvious places, but we didn’t hide it either. It was a way for us to make light of things. It’s not his fault that he’s sometimes absent-minded. If I had as much going on in my body and the noise in my ears that he does, I would be distracted too!

We’ve learned the benefits of routines, which build habits, which creates predictability. By the same token, if things are crazy busy, if we have visitors and even if we have a bad night’s sleep, the “normal” is a little off-kilter and we make adjustments. Today, he frequently is able to connect the dots, but I do still find things where they don’t belong. Just this morning I heard, “We must be out of bacon,” followed up by, “Found it!” The package of pre-cooked bacon he has every morning for breakfast was in the freezer. Life certainly is interesting with a brain injury!

Posted by Caregiver Support at 10:28 AM No comments:

Caregiver Support
Our aim is to help support caregivers and supporters of those with traumatic brain injury and brain related challenges.